Today seemed to be a show with a lot of emotional connections, music and mystery – who was that masked man?? (Spoiler alert: it was Errol Flynn!) From a photography point of view I’m not overly happy with the graininess of the images, but it’s the best I can produce in the circumstances. For some reason Harry and Chris had a lot of red-eye, but on-one else did (or has on other days) which was a little tricky to correct given the graininess and that I’m taking the pictures from the back of the theatre. Oh well, I did my best!

Today’s show featured: Tom Taylor (and his rakish moustache), The Charlie Montague Mysteries; Moonlight After Midnight; Harry Baker and Chris Read, The Harry And Chris Show 2; Choir of Man. Links to all the shows can be found on the podcast page linked above. As always, a selection of the photographs from today are posted below, with the full set available under fair use Creative Commons from my Flickr page.

Tom Taylor and his rather fetching moustache. 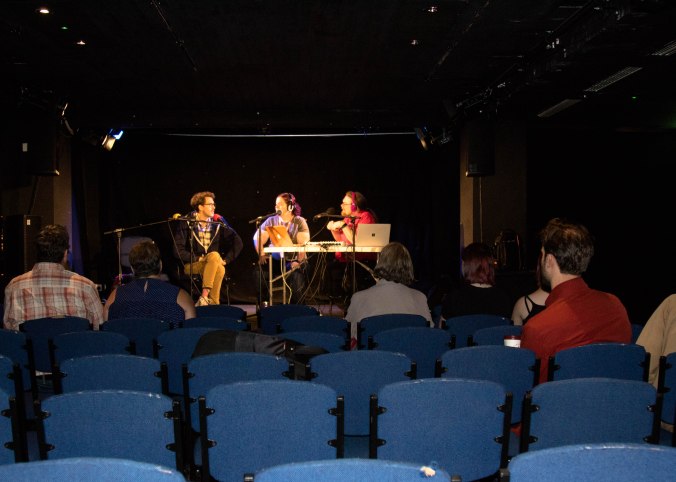 He took a Google image of the kind of rakish moustache he wanted to his barber, but didn’t know who the picture was of.

Ewan insisted he stay until the mystery was solved, even when the next guests were lined up! Tom shared a touching moment with Chris… 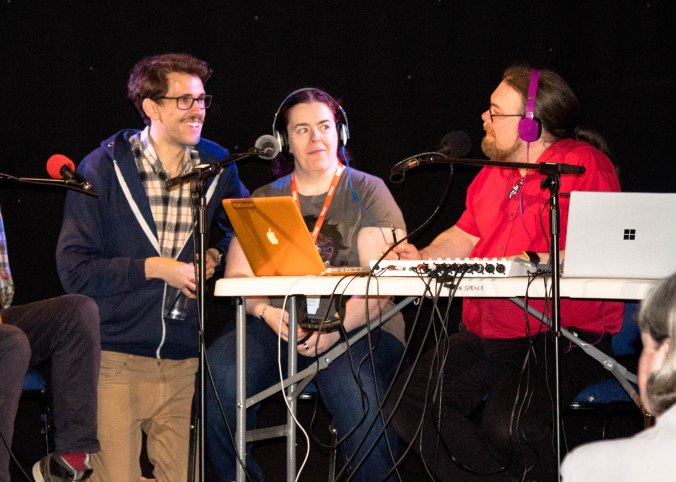 Harry and Chris next, bringing the second slot of live music into the theatre. Then Ewan asked them to improvise randomly selected styles of poetry/music, to everyone’s shocked amusement.

They did a really good job, even though they’d been put on the spot.

Another moment of emotional connection, between the stars of Moonlight After Midnight.

This does sound like an intriguing theatre piece (as you’ll hear when you listen to the podcast!)

Choir of Man were the final guests – well, two of them at least!

Why’s Ewan pointing? I wonder if it can be heard in the broadcast…